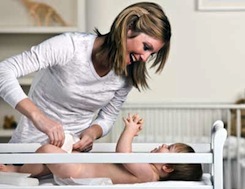 What’s that rash?  You are caring for a child, and you notice her itching what looks to be a rash.  For the most part, rashes are very common in children and are usually nothing to be too concerned about.  Rashes can be caused by a number of different reasons.  Check out 10 common childhood rashes so that you can be informed the next time you notice a rash.